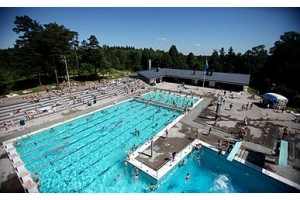 Summer weather has finally reached Finland, so yesterday I decided to move the office to a near-by outdoor swimming facility. The poolside was quite a good place to think about thermodynamics, as it provides several every-day examples of some of the relevant phenomena: the water evaporating from the skin and creating cold shivers tells us about the latent heat in phase transitions. The kids running around randomly and occasionally bumping into each other were reminding me of ideal gas.

Thermodynamics is also the basis of Airmodus particle counters. To be able to optically count even the smallest aerosol particles, we first grow them by condensing liquid onto them. The process requires creating a large enough supersaturation, so that heterogenous nucleation of the working liquid can take place. Even though first condensation particle counters were built more than a century ago, and the method is now widely used for measuring aerosol number concentrations, there still is room for technical development and scientific studies, especially about the nucleation process of the smallest nano-particles.

The next few weeks the blogger will concentrate on this kind of aerosol.