The more and more increasing need for better spatial understanding of aerosol particle populations have boosted the development of particle sensors. Typical lab grade aerosol instruments are just too expensive to be distributed in a way sensors can be distributed. This gives researchers and policy makers better tools to fully understand sources and root causes for air pollution problems. But as always, if it sounds perfect, it might not be true.

Most of the particle sensors that are almost or fully disposable are based on optical detection of particles. They either count particles one by one or measure the total scattering of the whole particle population. Almost all the sensors use red laser as light source. Thus the particle needs to be able to scatter red light. This means that the diameter of the particle needs to be roughly half of the wavelength of the light; in this case about 300 nm. This is a very hard limit for single particle counting but can be overcome by measuring total scattering of the whole population. But for total scattering measurement, very high number of particles is needed and thus it is not feasible in most environments.

The most used aerosol particle metrics for air quality are PM10 and PM2.5, meaning the “total mass of all particles” below either 10 or 2.5 µm. This is also what the sensors report, and that is the main problem with them. If an optical counter using red laser is used to measure particles, the first output is particle count from 0.3 µm to several microns or even tens of microns. The sensor can also measure the optical size of the particle. The density of the particles needs to be estimated and after that the mass of the measured population can be estimated. But it is very important to understand that for example the PM2.5 that is measured in this way is actually PM0.3–2.5 and not the PM2.5 that can be measured for example with reference instruments. Also very many of the particle sensors have lower limit of 0.5 µm or even higher further increasing the risk of missing mass signal (Kuula et al. 2020). 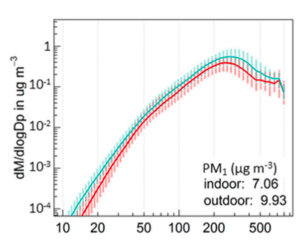 In many environments, the contribution of particles smaller than 300 or 500 nm to the total PM2.5 mass can be quite high. Zhao et al. 2020 published mass and number size distributions of 40 German homes, and their indoor-to-outdoor relationships. Figure 2 shows a plot from this study giving the average values of both indoor and outdoor mass and number measurements. Clearly the highest mass reading comes from the particle population below 1 µm with average of about 10 µg/m3 outdoors compared to the mass of particles between 1–2.5 µm of around 1–2 µg/m3. Explanation for this can be seen in figure 1, where an example of mass size distribution is presented from 10–800 nm. The mode is at around 300 nm and thus a particle sensor having lower detection limit around 300 to 500 nm will not measure a big portion of the real PM2.5 mass. This is problematic especially in indoor environment, where typically no big emissions for dust are present, but many of the emissions sources produce ultrafine and fine particles that also contribute to the total PM2.5 mass.

So when you are using particle sensors to measure PM2.5 or even PM10 mass, it is very important to understand that not all the mass gets measured and thus the reading can be considerably lower than the real value. Thus, instrumentation capable of measuring also the nanometer sized particles is very much needed to understand the whole aerosol population even if the metric is mass. 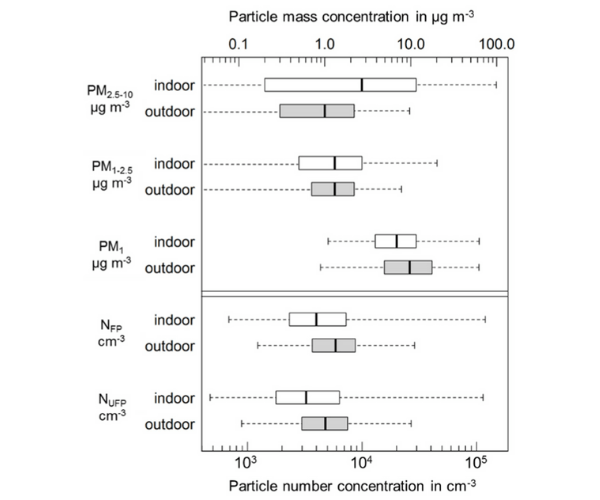