A recent article in Science [1] featured growing evidence that air pollution, especially fine particles, could be linked, not only to lung and heart disease, but also to Alzheimer’s and dementia. This kind of findings ought to interest people also outside the readership of scientific journals. 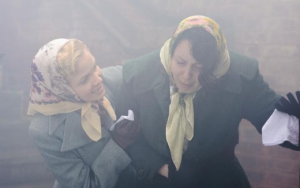 It is estimated that over 10 000 people died in the consequence of the Great London Smog in 1952. Credit: Alex Bailey/Netflix

The Crown, Netflix’ new series about Queen Elizabeth II, has turned out to be quite educational in this respect. Some newspapers even called it ‘the best anti-smoking ad ever filmed’ [2]. Two important characters, King George VI and Queen Mother Mary, both pictured constantly smoking and coughing, died already during the first few episodes. Especially interesting from an aerosol physicist point of view, was an episode taking place during the Great London Smog in 1952. It is truly enlightening to see how such bad air quality affected everyone’s day-to-day life, royal or non-royal. In The Crown Prime Minister Churchill treated smog as ‘act of God’, refusing to take action, which threatened to have serious political consequences. Also in reality, it took 4 years before the Clean Air Act was passed in 1956 [3], improving the air quality situation in London.

Since 1950s scientists have gathered an enormous amount of knowledge on the hazards of smoking, and on the effect of air pollution on human heath worldwide [4]. Still, the Crown has many parallels to modern days. Not only are many megacities suffering from serious air pollution issues and smog or haze episodes [5]. We have also seen irresponsible or even directly deceitful attitude towards legislation protecting our health and climate. We are also threatened by a rising ignorance or unwillingness to take scientific facts into account when making political or economical decisions. The scientists have still work to do on finding the best long-term solutions for air quality problems [6]. At the same time we need new ways of bringing the science to people’s everyday lives, be it TV-series, blogs or social media.

On measurement of particle size distribution of sub 5 nm aerosol particles; by Joonas Vanhanen, Nano Enthusiast and Airmodus CTOBlog, News
How many nanoparticles does your car emit?Blog